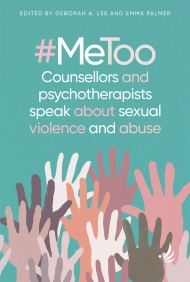 In 2017 the global #MeToo movement burst through the conspiracy of silence around women’s experience of sexual abuse and violence. Since then, other groups have found the courage to declare that they too have experienced sexual abuse and are unafraid and unashamed to let it be known. Now this ground-breaking book provides a space where counsellors and psychotherapists – more often the listeners to such stories – can tell their own stories, sometimes for the first time.

Each chapter is written by a counsellor, psychotherapist or therapy client, and followed up with a dialogue between writer and peer. Together they form a community of #TherapistsToo voices, brought together in the hope that readers both within and beyond the counselling and psychotherapy realm will feel less alone and more connected. This is a book for anyone wanting to understand the ubiquity of sexual violence and sexual abuse and how to respond, support, raise awareness, campaign and be part of creating a culture which says #TimesUp.

While taking every precaution and adapting how we work we are managing to maintain a normal level of service during the current restrictions to combat the spread of COVID-19. If you order from our website we are still able to dispatch books within a day or two. Our warehouse is working with reduced staffing levels but so far they are still sending out books as normal. All members of the team at PCCS Books are working from home and can be reached at their normal contacts.

If you are having difficulty ordering any of our books from shops or other online retailers, please remember that books can be purchased at discounted rates and with free postage and packaging from us directly at www.pccs-books.co.uk If the situation changes in the coming days and weeks we will be sending out updates as necessary. We hope you are all able to stay safe and supported in these difficult times.

We want a better deal for everyone who seeks help for emotional distress – better understanding, better responses, more choices and better outcomes. Our aim is that our publishing reflects that goal.

The Handbook of Person-Centred Therapy and Mental Health: theory, research and practice

Questioning Psychology: beyond theory and control