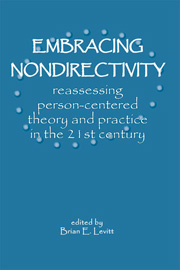 Many of the 'believers' in non-directivity can be found in Embracing Non-Directivity edited by Brian.E. Levitt (2005) (the roll call is an excellent reminder that it is not passé nor academically  unsound to be non-directive)  and the behavioural/attitudinal distinction runs through many of their articles, explicitly or otherwise. In fact, to drive it home from the outset, the introductory chapter is a revised version of Barbara Temaner Brodley's classic short paper from 1999, 'About the Non-directive Attitude', which articulates the issue simply and skilfuly and is a great opener. She also carefully sketches other themes which will recur throughout the text: influence vs. direction; the relationship with the core conditions; the role of theory; the notion of non-directive therapy as a principled art inolving 'freedom within great discipline' (p3). Her clarity is welcome, as is her controversial closing reminder that the non-directive attitude 'is in the bones of [Carl Rogers'] theory and practice. It is not a myth.' From hereonin the book is almost an embarrassment of riches. It is a scholarly collection and one that lends formidable weight to the argument that rather than being out-of-date, non-directivity is more relevant now than ever, and as the breadth and intelligence of the articles suggests, we might even be seeing a significant shift or re-balancing of Person-Centred thought - a kind of back to the future where the contemporary proliferation and dilution of ideas and practices inspires some to seek out once more the essence of the approach. … I don't think it's overstating things to identify this as a key text for anyone wanting to understand what Carl Rogers' approach to therapy has become, some 50 years after its inception. Andy Rogers, Ipnosis No 21, 2006 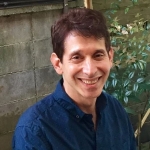 Brian Levitt is a registered clinical and rehabilitation psychologist and a partner with Kaplan and Levitt Psychologists in Hamilton, Ontario. He works with people who have experienced trauma and loss, many of whom are also struggling with chronic pain.  He both trained and later worked at the Chicago Counseling and Psychotherapy Center, which grew from Carl Rogers’ work at the University of Chicago. Person-centered theory and applications are an abiding passion, and he has explored these in all aspects of his work across a wide variety of settings. Brian has edited two other books with PCCS Books, Embracing Non-Directivity (2005) and Reflections on Human Potential (2008).

Carl Rogers’ Person-Centered Approach: Toward an understanding of its implications