The Human Being Fully Alive: Writings in celebration of Brian Thorne 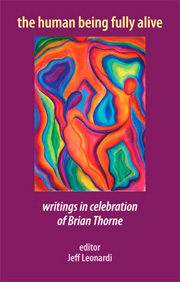 This collection of writings by eight enthusiastic exponents of the Person-Centred Approach is presented as a Festschrift, offered in tribute to Brian Thorne, one of Britain’s seminal practitioners, teachers and writers of that therapeutic orientation from its earliest days in the UK. Brian is particularly recognised for his ability to focus and express the spiritual dimension and applications of person-centredness. Each essay relates to the spiritual dimension of therapy and being human from a variety of perspectives and will speak to readers of many faith affiliations and none.

Jeff Leonardi has gathered material which breaks out of the either/or trap of faith positions and embraces the living experience of human beings in all its richness and profundity, while acknowledging a dimension which both Carl Rogers and Brian Thorne refer to as ‘spiritual’ without the dogmas which alienate so many from institutional religions.

Introduction  Jeff Leonardi
Walking the Talk: Potent therapy is a risky business Jan Hawkins
Caring for the Soul as the Keystone in Health Care Mia Leijssen
What We Are Meant to Be: Evolution as the transformation of consciousness  Jeff Leonardi
On Faith and Nihilism: A considerable relationship  Dave Mearns
Mindfulness and the Person-Centred Approach  Judy Moore and Alison Shoemark
Spirituality, Focusing and the Truth Beyond Concepts Campbell Purton
The Person and Evil  Peter F. Schmid

...I hope that those who do identify as person-centred will look beyond a binary view of Brian Thorne and read what these authors have to say. ... And for those of us who like to think about what this whole therapy business is about and how  that fits into life, the universe and everything it's well worth a punt. William West, University of Manchester.

The Human Being Fully Alive: Writings in celebration of Brian Thorne

After counselling training at Aston in Birmigham (1978 - 1979), I worked as a counsellor, supervisor and trainer for ten years, during which time I also pursued, or was pursued by, training for ordination as a priest in the Church of England. I served as a parish priest in Cumbria from 1988- 1997 and was then appointed Bishop's Adviser for Pastoral Care and Counselling, and Associate Minister in a cluster of rural parishes in the Lichfield Diocese in Staffordshire. In 2009 I was awarded a doctorate, 'Partners or Adversaries: Christianity and the Person-Centred Approach ' by the University of East Anglia. In 2010 PCCS Books published a collection of papers which I edited and contributed to: ‘The Human Being Fully Alive: writings in celebration of Brian Thorne’. I retired from full-time work in 2014 and now live in West Wales, continuing as a Counsellor, Supervisor and Trainer in private practice, and with Licence to Officiate as Priest. In 2015 I became an Honorary Research Fellow of the Religious Experience Research Centre of the University of Wales Trinity St David at Lampeter, where my main focus of research is relational spirituality in the therapeutic context.

The Life and Work of Carl Rogers