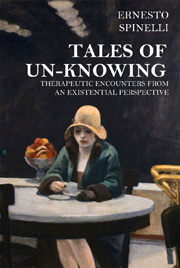 Ernesto Spinelli is one of the leading exponents of existential therapy today and one of its most brilliant practitioners. Rather than expounding a set of theories, Spinelli here gives an account of some of the most unforgettable therapeutic encounters that he has experienced during his professional life. His method comes to life in a way that is compelling and often profoundly moving. These stories of conflict and anxiety derived from human relationships illustrate the existential concern with ‘being in the world’ and act as catalysts to challenge the reader’s personal experience even if he or she has had no direct experience of therapy. Told with an Oliver Sacks-like skill, these encounters introduce us to Mr Jones who refused to grow old gracefully, to moody and introverted Amanda who believed she had been given the wrong body, to Jim the octogenarian who lived in two time zones and to Giles whose obsessive identification with Einstein meant that his sexual activity was like a ‘living mathematics’ full of enthralling permutations. In the course of this book Spinelli also tackles head on the last great taboo of therapeutic practice — sexual attraction between therapist and client. In Spinelli’s previous and highly acclaimed book, Demystifying Therapy, he began the process of peeling away the layers of mystery that surround therapeutic practice. Now, with astonishing effectiveness, he explains the core of his work and why the existential approach is the way forward in the treatment of the psychological condition. This is not the way of psychotherapeutic certainty and reductionism. It is a way of ‘Un-knowing’.


Prologue
1. Growing Old Disgracefully
2. Vile Bodies
3. The Royal Road
4. The Tale of the Therapist who Discovered that He was the Client
5. Lou and Simone: Truth or Happiness?
6. A Life Divided
7. Lifting the Veil
8. Her Last Breath

His modesty inclines me to believe that he is a therapist who can be trusted. Anthony Storr, psychiatrist.

To a certain extent every attempt to translate lived experience onto paper is doomed to failure, and it takes not only a skilled writer but also a skilful practitioner to elicit in the reader some of the sense of humanity, immediacy and reality of the original relationship while not retreating into sentimentality and narcissism … Spinelli’s book is difficult to put down and one is continually reminded with vivid cliarity of the personal and universal dilemas of the interlocking of normal and therapeutic life. Martin Adams, existential psychotherapist and educator.