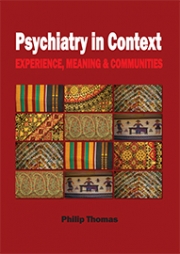 This book examines the central role of contexts in understanding psychosis and distress. The contexts in which we all exist, historical, cultural, social, political, economic and interpersonal, shape and give meaning to our lives for good or for bad. Scientific research confirms how contexts of adversity such as trauma, abuse, and racism can lead to psychosis. Thomas argues that if we are to prioritise the role of values and ethics in mental health care we must engage actively with the contexts of patients’ lives rather than focus on the endlessly fruitless search for the biological origins of distress and increasingly technological approaches to its management.

After careful examination of the problems of psychiatric diagnosis, treatments, scientific models of madness, and neuroscience, Thomas goes on to demonstrate how contextual factors are central to mental distress. He proposes that the opportunities we have through narrative, to talk about our experiences and the contexts in which they are embedded, play a vital role in the task of making sense of our lives, in health, when distressed, or when overwhelmed by psychosis.

Section 3: On Neuroscience and Narrative
Chapter 6  Why (Neuro)science is Incapable of Explaining the Experiences of Psychosis
Chapter 7  Narrative Psychiatry: A Basis for Stories in Psychiatric Practice

Psychiatry in Context follows on from Phil Thomas’s previous ground-breaking analysis Postpsychiatry (Bracken & Thomas, 2005), and is set to become just as influential and indispensable to anyone concerned with the politics, practice, and philosophy of mental health … Thomas - himself a psychiatrist - issues a prescription for a medical discipline that, in his own words, is mired in turmoil and crisis. His proposed solutions are far-reaching in application, compassionate in scope, and outline a charter for a version of mental health services that, if implemented, could truly be approached with hope and reassurance rather than uncertainty, stigma, and fear. Eleanor Longden, researcher, lecturer, HVN, Intervoice, WHO. Full review on Mad in America website.

A brilliant deconstruction of modern psychiatry, and powerful manifesto — and blueprint — for change. And the writing sparkles with lucidity, making Psychiatry in Context an exceptional pleasure to read. Robert Whitaker, author of Anatomy of an Epidemic and Mad in America

Wise, accessible and humane critique of psychiatry, by a psychiatrist. Essential reading for all those concerned with the future of psychiatry. Jacqui Dillon, Chair, Heaing Voices Network and co-editor of Models of Madness, 2nd edition (Routledge 2013)

Psychiatry in Context describes, with incisive clarity, the multiple crises facing psychiatry and mental health services. Using a powerful mix of historical and scientific evidence, together with illuminating stories, Phil Thomas starkly describes the darkness that has befallen the world of mental health, before showing us some ways back out to the light. This is an insider’s account of all that is wrong with the profession of psychiatry, how it became so inadequate and damaging, and how, with our help, it might go about healing itself. Dr John Read, Professor of Clinical Psychology, University of Liverpool. Author of Models of Madness (Routledge, 2013), and A Straight Talking Introduction to the Causes of Mental Health Problems (PCCS Books 2010)

In this new book Philip Thomas gives us another penetrating examination of the current state of psychiatry. He outlines the shortcomings of the biomedical model currently favoured by mainstream psychiatry and emphasises instead the need to attend to individual meaning and the social and cultural context. Psychiatry in Context deserves a large readership. Dr Allan Beveridge, Consultant Psychiatrist, Queen Margaret Hospital, Dunfermline 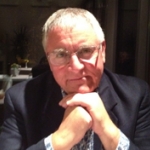 Philip Thomas worked as a full-time consultant psychiatrist in the NHS for over twenty years. He left clinical practice in 2004 to write. He has published over 100 papers mostly in peer-reviewed journals, latterly in philosophy and its relevance to madness and society. He is well known for working in alliance with survivors of psychiatry, service users and community groups, nationally and internationally. Until recently he was chair of Sharing Voices Bradford, a community development project working with Black and Minority Ethnic communities. He was a founder member and until 2011 co-chair of the Critical Psychiatry Network. His first book, Dialectics of Schizophrenia was published by Free Association books in 1997. He has co-authored two other books, including Postpsychiatry, with Pat Bracken.