Contributions to Client-Centered Therapy and the Person-Centered Approach 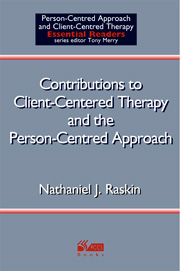 Contributions to Client-Centered Therapy and the Person-Centered Approach brings together an important set of difficult-to-obtain original papers and writings for academics, teachers, researchers and all serious students. This humble title conceals a treasure-trove of work covering practically the whole sixty-year history of this approach from its origins as ‘nondirective therapy’ to its present day incarnation as the ‘person-centred approach’. As a student and later colleague of Carl Rogers, Nat Raskin’s contributions are of particular value to present-day scholars. His involvement in the development of the approach is traced through sixteen chapters starting with one of the most frequently-quoted papers in the client-centred archive and concluding with a paper published in 2001.

I found reviewing Contributions to Client-Centered Therapy and the Person-Centered Approach extemely rewarding and fulfulling. This work is a must-read for any counsellor practicing Client-Centred Therapy. Diane Lorimer, Counselling Australia Vol.5, No.1 2005 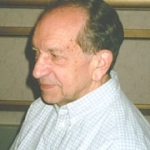 Contributions to Client-Centered Therapy and the Person-Centered Approach

Nat Raskin began graduate work with Carl Rogers at Ohio State University in 1940, continuing at the University of Chicago after World War II, receiving his PhD in 1949. He returned to New York, taught at Hunter College, New York University and Columbia University's Teachers' College, and became Director of Research Planning at the American Foundation for the Blind from 1952 to 1957. He went back to Chicago as Chief Psychologist at Children's Memorial Hospital with an appointment at Northwestern University’s Medical School. In 1963 he resigned from Children's, but continued at the Medical School until 1991, when he became Professor Emeritus of Psychiatry and Behavioural Sciences. Nat was Rogers’ student, associate and friend during a span of 47 years until Rogers died in 1987, including a sabbatical in La Jolla in 1980–81 when they worked together on an ‘Ongoing Learning Program in the Person-Centered Approach’.