The Handbook of Person-Centred Therapy and Mental Health 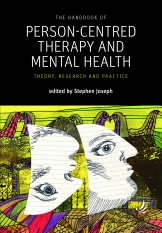 
Over recent decades the person-centred approach has become a major force in the world of counselling and psychotherapy. Yet the person-centred approach to understanding distress and dysfunction has been overlooked within mainstream mental health services. In the first edition, Richard Worsley and I speculated that perhaps this was the result of the false belief held by many psychologists and psychiatrists that person-centred therapy is a good idea for the worried well, but that serious mental health problems should be left to the truly competent. There is, of course, a self-fulfilling prophecy to this. As the person-centred movement becomes marginalised within the National Health Service (NHS) because of these beliefs, training courses struggle to provide placements and supervision for trainees to work with clients with serious problems. It thus becomes the case that person-centred practitioners are often ill-equipped to work with anyone but the worried well, at least in the eyes of these other professionals.


It is this tendency towards a self-fulfilling prophecy that this book is intended to address. Reflection on the theory that underlies person-centred practice shows it has potential for helping people who would otherwise be considered to be suffering from serious mental health problems. However, the main problem is one of communication, as we are essentially dealing with a clash of paradigms: the potentiality model of the person-centred approach on the one hand, and on the other, the medical mode.
The person-centred approach to helping is based on the assumption that human beings have an inherent tendency towards growth and development, such that movement towards becoming fully functioning will happen automatically when people encounter an empathic, genuine and unconditional relationship in which they feel valued and understood. However, it is recognised that such relationships are rare; the inherent tendency towards becoming fully functioning is more frequently thwarted and usurped, leading instead to psychological distress and dysfunction (Rogers, 1959). For the person-centred therapist, the power and direction for change comes from within the client; their task is solely to provide the new relationship that allows the person to flourish.


The medical model is based on the assumption that there exist specific disorders requiring specific treatments. So, when we consult a doctor with an ailment such as a stomach pain, we are likely to be uncertain what the cause of our pain is and anxious that they accurately identify the problem and quickly provide the correct treatment. To do this, the practitioner needs to be an expert diagnostician. They need to examine us in order to identify our specific symptoms and thence diagnose the most likely cause. To do this, they need to know the conditions we may be suffering from, and the symptoms of each. They will ask us questions about the nature of our pain, its location and duration, and they will examine us physically for bruises, swelling and so on. Having reached a diagnosis, they are in a position to prescribe the correct treatment. The treatment will depend on the condition from which they think we are suffering.

Mental health practitioners may be dealing with mental rather than physical health but, by and large, they still use the medical model. Traditionally, textbooks on psychiatry and abnormal and clinical psychology, for example, tend to be organised around each of the so-called disorders (for example, anxiety disorders, somatoform and dissociative disorders, mood disorders, schizophrenia, substance-related disorders, sexual disorders, personality disorders). The causes, correlates and effective treatments are discussed in turn for each disorder, the assumption being that psychological problems are like medical problems – they too require expert diagnosis, so the right treatment can be prescribed.

The mental health professional is therefore trained in the use of the American Psychiatric Association’s Diagnostic and Statistical Manual (DSM) of Mental Disorders. First introduced in 1952 (DSM-I), followed by revised editions in 1968 (DSM-II), 1980 (DSM-III), 1987 (DSM-III-R), 1994 (DSM-IV), it is now in its fifth edition (American Psychiatric Association, 2013). DSM-5 is a voluminous work, running to many hundreds of pages, that describes the range of psychiatric disorders and the detailed procedure for the diagnosis of each.

Whether or not they adhere strictly to the DSM, many mental health professionals take for granted that there is a need for specific treatments for specific conditions; alternative ways of thinking are rarely acknowledged. As already noted, the person-centred approach emphasises developmental processes and the actualising tendency of the individual; there is no need for diagnosis, because problems in living all have the same essential cause and the approach to therapy is always the same. Person-centred therapy is a relationship in which the client is able to grow and to self-right in such a way that they move away from façade, from pleasing others, and towards self-direction, openness to experience, acceptance of others, and trust of their self (Rogers, 1961). As a consequence, the person-centred approach uses different terminology to describe mental health.

Person-centred therapists do not use the language of psychiatry and do not make the assumption that specific conditions require specific treatments. This has meant that relatively little has been written from the client-centred school of thought about the various so-called disorders – a silence that has left client-centred therapy marginalised from mainstream mental health services. This does not mean that it is irrelevant, although it may seem so to those other professionals who do assume that specific conditions require specific treatments.


It is not the intention of this book to suggest that there is a need for a diagnostic approach; our aim is to show that the person-centred approach is applicable to understanding and working with people who are (or are likely to be) diagnosed as experiencing psychiatric conditions. Rogers wrote that, in his experience, whatever the client’s problem was, whether it was to do with distressing feelings or troubling interpersonal relations, all were struggling with the same existential question: how to be themselves. But to what extent can person-centred personality theory account for the range of psychopathology that is described in the DSM? We can’t simply assume that person-centred theory can explain everything, and we certainly can’t expect other health professionals who hold the medical-model view to take us seriously when we don’t provide theory and evidence.

Some person-centred practitioners have indeed revelled in living on the edges, taking great satisfaction in the radical nature of the paradigm. However, this stance has also hampered communication and respect between different disciplines. By not being able to articulate answers to those in the psychiatric and psychological professions who question how the person-centred approach can be used with people with severe and chronic psychological problems, the person-centred community has isolated itself and allowed itself to become marginalised. As I said, I am not advocating anyone should adopt psychiatric or psychological techniques in their clinical practice. Still less am I condoning the medical model as a basis for understanding distress and dysfunction. What I am saying is that I think person-centred therapists have a duty to understand their psychological and psychiatric colleagues – what they do and why they do it – so that, in turn, they have the language to be able to articulate clearly what it is they do and why they do it.


I realise that many counsellors and psychotherapists, for ideological, social and political reasons, tend not to use psychiatric terms. For sure, I agree that how we label the phenomena that we are attempting to describe is not a trivial issue, but if you want to be understood, sometimes you have to meet the other person where they are, and talk to them there. For this reason, I have asked our contributors to write about the person-centred approach in relation to the professions of psychology and psychiatry, the medical model and the various so-called psychiatric disorders, and issues of assessment and diagnosis.

The point is simply to illustrate that most of these ‘psychiatric disorders’ are terms used by psychologists and psychiatrists to give themselves a common language with which to communicate to each other about best practice as they see it. As counsellors and psychotherapists, we can use the language of psychiatry and psychology to help us communicate to a wider audience and to reach the new generation of psychologists and psychiatrists. This is particularly apposite at a time when the medical model is being questioned more widely (Bentall, 2003), particularly in areas of positive psychology (see, for example, Maddux & Lopez, 2015).

In this book, I have asked a range of authors to show to person-centred practitioners and trainees how the person-centred approach tackles some of the issues confronting psychologists and psychiatrists.

These are the questions that this book sets out to answer. Each chapter addresses a particular set of theoretical issues or challenges posed by working in a specific professional context. Nearly all the contributors to the first edition of this book have kindly updated their chapters to include new ideas and research that have emerged over the past decade. I have also sought out contributions from new authors who have advanced our understanding in areas not covered in the first edition.

As with any such book, the views expressed in each chapter are those of the authors. The range of views included here all come under the umbrella of person-centred practice.